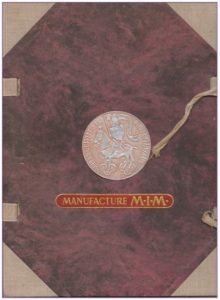 At the end of the 90s, a Belgian friend told me that M.I.M. molds were for sale. A few days later, we were in Brussels, in a beautiful 19th century house, and we were climbing a staircase with stained glass windows, which certainly led us to paradise.

On the third floor, a large, very bright room was used as a workshop. The “heating bench”, a kind of large flattened pipe, fixed on a long metal table, cluttered the center of the room. This large burner, with holes for the flames to escape from, was fuelled by gas and was used to keep the moulds at a high temperature. All around, industrial furniture contained stocks of raw, already cast parts. Our host told us that the part had not been in use for several years already. All the furniture came from the original workshops of the firm M.I.M. He did not specify how he had acquired this workshop stock.

After opening a closet, he presented us with an important set of M.I.M. figurines, very nicely painted by his wife. We learned that his wife, who had studied at the Royal Academy of Fine Arts in Brussels, was an artist-painter and occasionally painted figurines to satisfy some Belgian collectors. The soldiers were perfectly aligned on shelves, and the effect was striking; to see so many pieces together was exceptional

The moulds were on the first floor. Their weight and volume were unusual. They appeared to be made of a golden metal alloy, and their design was peculiar

The documentation that accompanied the moulds was the main thing that caught my attention. Two large binders, or “folders”, were filled with numbered files corresponding to each catalog reference. Inside, there were descriptions, hand painted color drawings, black and white drawings, all original, probably by the hand of Émile Salkin, a collaborator of Emmanuel Steinbach, the founder of M.I.M.

In addition to the figurines known to the manufacturer, there were also completed projects. The “academic” drawings for the engravers: a treasure! We said goodbye to our host and promised to meet again

I had created “The Soldier’s Box” two years earlier, and I couldn’t afford to take this opportunity. I told my friend Edouard Pemzec about it, who bought the moulds and did nothing about it. Five or six years later, I exchanged the molds and documentation with Edouard for my Lucotte collection. I put the whole thing in my cellar and didn’t do anything with it either…

Three years ago I started to work on M.I.M. In the back of the workshop, there were also the masters of plaster projects, plaster moulds. Sometimes masters in lead. Moulds that had never been exploited and whose sprue had not been drilled.

It is all this discovery of the firm M.I.M. as well as its ephemeral history (the production lasted only ten years from 1938 to 1948), that I wish to share with you in this section. The documents are extremely numerous and should be of interest, in addition to the collectors of the brand, to all lovers of antique figurines.